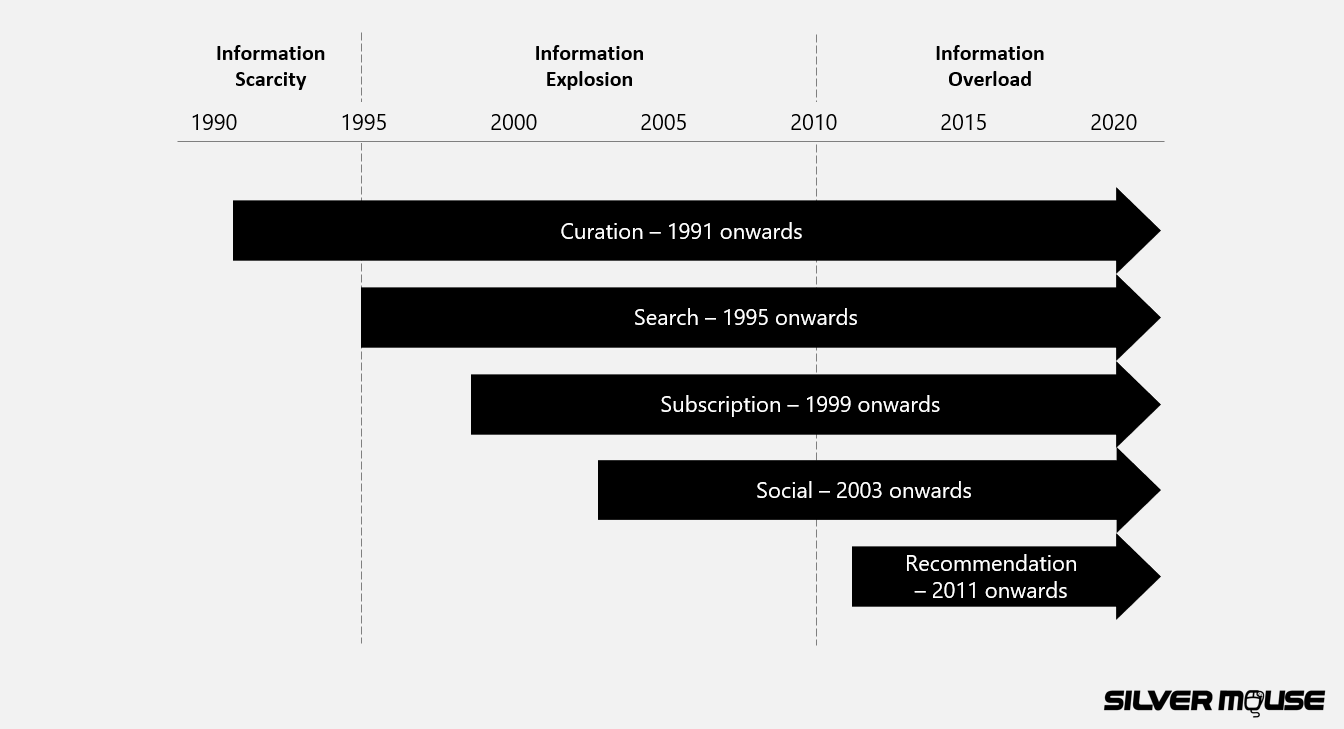 I was reading the Attention Factory book that talks about the story of China’s ByteDance and TikTok, there’s an interesting take by the author on the evolution of digital content distribution.

It is about how digital content distribution has evolved from the curation (portal) since 1991, search since 1995, subscription since 1999, social since 2003 to the recommendation since 2011.

At the backdrop of this evolution, we are also witnessing the much talked about the transition from Web 1.0 (one-way broadcast) to Web 2.0 (user-generated content).

Coming back to the topic, it is important for media practitioners (media owners, agencies, bloggers, or content creators) to understand the history, and digest what’s happening now.

Web portals like Yahoo, AOL are the flagship products of Web 1.0 (one-way broadcast), when the Internet was just starting to be accessible to users around the world.

The portals act as the gateway of the Internet, they wanted their site to be the first page you fire when you open your browser – to find information and navigate from there.

Just like the prints (newspapers and magazines), the information is organized and published by humans – the editorial team behind the web portals.

When the Internet is growing with more and more information, it is no longer feasible for humans to manually index and organize the content.

This coincides with Web 2.0, starting with the blog era when anyone can set up their blogs and start publishing content online. This was when the information explosion happened.

Yahoo and Altavista were the first movers in search, but Google with much better indexing and search algorithms – changed how people search and consume information ever since.

Email was initially used for work communications, then used by marketers to communicate with their subscribers, members, and customers who subscribe to their newsletters.

RSS provides a similar mechanism for you to subscribe to multiple news sources instead of visiting the site one by one – it’s mainly used by media practitioners though.

With RSS having never really become mainstream and the mailbox becoming cluttered, subscription hasn’t really been adopted by the mass audience.

The rule of digital content distribution has been totally rewritten by the emergence of social media – when information is highly decentralized.

Anyone (brands, publishers, individuals) can easily create or distribute content on social media, information is personalized too as everyone gets their own news feed.

When the information is becoming overloaded, content needs to be personalized and delivered to the users based on their interests – without the need of hitting the subscribe or follow button.

While tech giants are working on improving their algorithms, TikTok has championed its recommendation engine (used by Toutiao earlier) to make content discovery effortless.

With its Discover and Google News apps, Google too has been working on its own recommendation engine after shutting down its RSS-based Google Reader almost 10 years ago.

5 reasons why TikTok Shop can succeed in video commerce
April 13, 2022