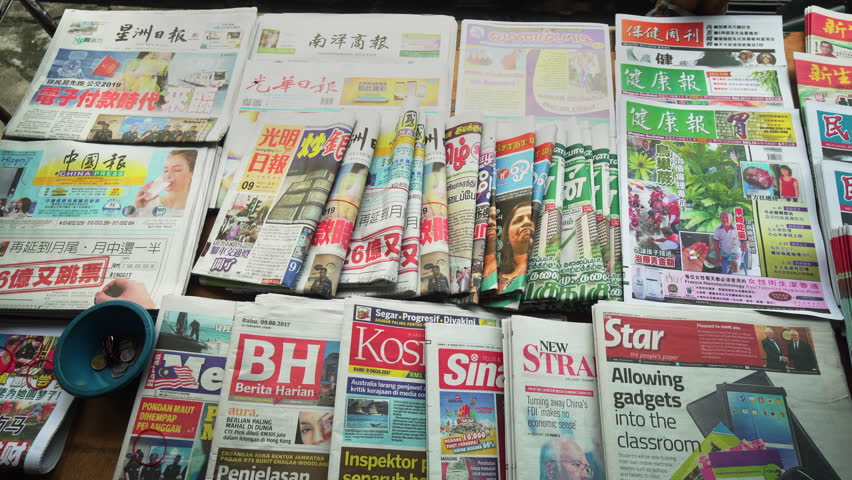 In this Internet era, many are reading news using their smartphone especially via platforms like Facebook, be it real or fake news.

Are you still reading newspaper prints? Besides probably your parents, just ask around your friends or colleagues, I will be surprised if more than 15% of them are still reading a newspaper every single day.

In fact, some 1,800 newspapers have closed down in the United States since 2004.

While the newspaper readership has been dropping every year, it is a myth that a big chunk of advertising expenditure (adex) in Malaysia is still going to prints.

Let’s crunch some data, shall we?

More than a quarter adex goes to Newspaper

According to this report by Nielsen, 38% of adex was allocated to print newspapers in 2018, do take note that the total pie does not include digital ad spend in Malaysia.

Another article with data sourced from GroupM reported that in 2017, 29% of RM4.59 billion total adex went to the newspaper.

As opposed to Nielsen’s report earlier, the total adex here includes digital ad spend. The newspaper pie as expected went down from 29% in 2017 to 25% in 2018 in the same report. 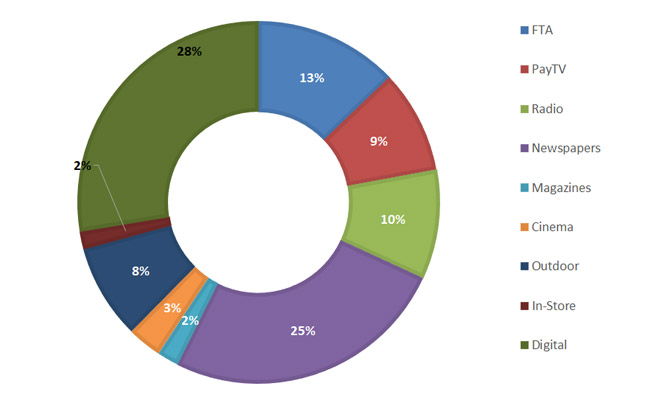 25% on the prints is sort of tally with the breakdown revealed by our Communications and Multimedia Minister earlier, when he said by the middle of 2019, digital media, newspaper and television (free-to-air and pay TV combined) would each command approximately 25% of adex.

Let’s check on another data source forecasted by Statista below. 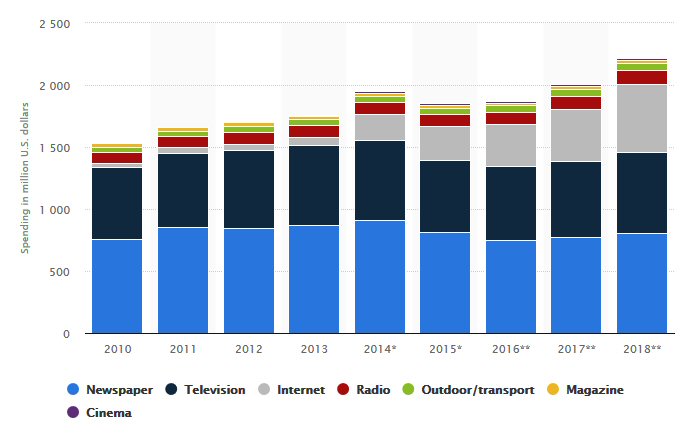 If we refer to the 2018 data above, here’s the breakdown by media type:

While the total adex amount by Statista seems to be on the high side, all data sources are pointing to a conclusion – at least 25% of total adex in Malaysia is still going to the newspaper.

Even with the newspaper ad spend dropping year-on-year, it is still absorbing a big chunk of adex despite the alarming decrease in print circulations.

By referring to the statistics reported by the Audit Bureau of Circulations (ABC), total circulation (all Malay, English, Chinese newspapers combined) has dropped consistently over the years.

The descent has been more than 10% year-on-year since 2013, with just over 2 million paid newspapers circulated daily in Malaysia last year, which means less than 10% of Malaysians are reading newspapers!

Only 12.5% of Malaysians read print newspapers according to another report, which could make sense too considering that a single newspaper can be shared within a household.

To give you a context, let’s take Sin Chew as an example, which has the highest distribution among all the newspapers at 288K daily circulations (note: day version, from January to June 2018).

How much do advertisers pay for a full-page ad on Sin Chew to reach a maximum of 288K households? Does YouTube Masthead with a reach of 6-7 million people make much more sense?

Why do brands still advertise in the newspaper?

While some brands are already moving towards digital, there are still many whose adex is heavily allocated to newspaper prints.

Are they “blinded”, or choose not to read into the circulation figures? Maybe that’s not all, there are some other factors based on the opinions we have gathered:

Just ask yourself this, will the ad dollars better spent on digital, or even other traditional media like out-of-home, cinema, radio, and TV? Perhaps, newspaper ads will only make sense if your customers are predominantly more than 40 years old.

Think about this, people are still watching TV, going to theatres, listening to the radio and looking at billboards while driving. The fact is, lesser and lesser people are reading newspapers.

Don’t get me wrong, I am still reading and browsing the newspaper every day, I have friends who work in the press. In fact, most of them are digitizing their content and reaping online ads revenue too.

I am not writing this to discredit the newspaper industry (which they have to evolve anyway). I hope good old newspapers will still continue to deliver verified news and in-depth content. The main question mark here is the adex.

You might want to avoid the classic marketing blunder, “Half the money I spend on advertising is wasted; the trouble is I don’t know which half.”